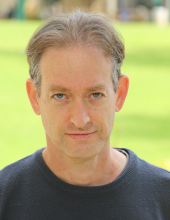 The role of biogenic volatile organic compounds in regional ozone formation under global warming: investigation in the Mediterranean Basin

Biogenic volatile organic compounds (BVOCs) emitted from vegetation account for approximately 90% of total global VOC emissions. BVOCs play important roles in key processes, which affect air pollution, the radiation budget and climate. Mediterranean regions are occasionally characterized by strong photochemical activity and high ozone (O3) concentrations. Emission of BVOCs in Mediterranean forests are at relatively high rates, induced by high temperatures and sunny conditions and have been of special interest in the past few decades because they have been identified as an important factor in regional air pollution control strategies and climate related properties. Global warming acts to increase temperature and dryness in Mediterranean regions, which in turn leads to an increase in O3 concentrations. Drought conditions, high temperature and high O3 levels, are also recognized as stress factors which enhance and change BVOC emission rates and patterns.

However, currently there is lack of data from field measurements to understand the impact of multiple, co-occurring stress factors on BVOC emission. Moreover, our current ability to model and assess the impact of BVOC emissions on O3 formation is limited. Two major uncertainty sources include insufficient knowledge about the BVOC emission rate and speciation and inaccuracies in photochemical mechanisms. Our study is aimed at quantifying the impact of BVOCs emitted from two typical Mediterranean forests on regional O3 formation, by interaction with anthropogenic air pollution emitted upwind of the forests, to quantify BVOC, O3, CO2 and H2O net exchange flux over the forests, using the Eddy Covariance (EC) method. BVOC flux is quantified by using a proton transfer reaction–time of flight–mass spectrometer (PTR-TOF-MS).

Branch-level measurements will be performed in order to quantify BVOC emissions from specific vegetation, followed by GC-MS analyses. Recent studies indicate that using the PTR-ToF-MS, enables quantifying extremely large numbers of BVOC compounds compared with past measurements, which can significantly improve our understanding of the contribution of BVOCs to photochemical pollution formation and climate-related properties. 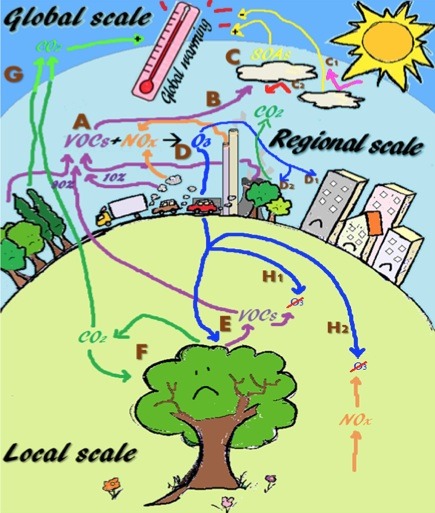 formation. Chemical pathways for new identified species may be added, subjected to sensitivity analysis by a chemical-lagrangian box model. Emission fluxes in the model will be based on a detailed emission inventory available for the studied region.

The O3 concentrations obtained by WRF-Chem will be evaluated using available data on trace gas concentration in the region, from a continuous measurement network operated by the Israel Ministry of Environmental Protection.

We believe that this study will enable improving our understanding of BVOC emissions in Mediterranean regions and elsewhere. In particular, the Mediterranean Basin, is recognized as a climate change “hot spot”, where high O3concentrations, high temperature, and drought conditions tend to occur simultaneously during the warm seasons. Therefore, this region can be used as a natural laboratory to study BVOC emissions and its influence on regional O3 formation, under the influence of global warming-related properties.

Measurement-Based Modeling of Methyl halides emission in the Dead Sea

The contribution of terrestrial ecosystems to the atmospheric concentrations of methyl halides is poorly quantified, although they play a key role in several important processes in the atmosphere, including tropospheric and stratospheric ozone destruction. We use advanced methods to separately sample air in the downward and upward flux, which is followed by analysis of the sampled air for CH3Cl, CH3Br and CH3I, as well as C2H2Cl2 using GC-MS. Measurements take place at the Dead Sea, representing a salt lake environment under semi-arid conditions, during different seasons, in several different sites over seawater, bare soil and vegetation, which enable investigation of the emission and deposition strength of these components. The analyzed iodine species are used as input for atmospheric chemical simulations, using the MECCA model, in an attempt to identify the source of IO formation in this area, and in order to characterize the potential impact on tropospheric ozone destruction.

In this research we aim at investigating the impact of using alternative fuels for transportation by applying a highly detailed atmospheric chemistry model.

The global economic damage associated with O3 uptake by crops is currently estimated to be about $11-26 billion annually (e.g., see http://icpvegetation.ceh.ac.uk/publications/documents/ozoneandfoodsecurity-ICPVegetationreport%202011-published.pdf), and is expected to significantly increase by 2030 (e.g., $17 - $35 billion annually for the IPCC A2 scenario). While bread wheat (Triticum aestivum) is considered to be one of the most ozone-sensitive crops identified to date, no specific information is available for wheat loss due to exposure to ozone in Israel. This project is a multidisciplinary research aimed at improving Israeli wheat productivity and quality under the unique conditions prevalent in Israel. The aim of our group is to shed light on the impact of atmospheric ozone and wheat, by selection of the most ozone-resistant cultivars under the specific growing conditions of a specific growing area. Experiments using open top chambers (OTCs) are going to be used for this research.

Ozone uptake by vegetation under semi-arid and Mediterranean conditions

Our group investigates, also in collaboration with the research group of Professor Dan Yakir (Weizmann Institute) the ozone uptake by forests, as well as agricultural fields, in several measurement sites along the Israeli climatic gradient, while trying to identify ozone deposition rate, and the related impact on net ecosystem exchange (NEE), transpiration and evaporation under semiarid conditions (e.g., Yatir forest) and typical Mediterranean forests.

This research is aimed at improving high -resolution irrigation scheduling efficiency, by using the WRF-Chem atmospheric model combined with the HYDRUS model. By comparing WRF predictions and measured meteorological parameters in meteorological stations, we aim at improving the evaporation predictions over Israel. Since 2015, The two universities are working in collaboration with the group of Professor Erick Fredj from (The Jerusalem College of Technology), in the setup/run/analysis of the WRF-Chem model.